Waterlogic, a leading global designer, manufacturer, distributor, and service provider of purified drinking water dispensers, is pleased to recognise Iberostar for its contribution to responsible tourism. Waterlogic’s coveted Oceansaver Accolade acknowledges and celebrates customers who are taking the necessary steps to actively reduce plastics in their workplace.

Iberostar Group is a 100% family-owned multinational Spanish company, dedicated for more than 60 years to tourism. Iberostar Hotels & Resorts has a portfolio of over one hundred 4 and 5-star hotels and more than 34.000 rooms in 16 countries including Brazil, Mexico and the Dominican Republic

In 2018, Iberostar launched its ‘Wave of Change’ movement to protect the oceans and lead responsible tourism. Wave of Change consists of three pillars – moving beyond plastic and towards a circular economy, promoting the responsible consumption of fish and seafood, and improving coastal health. In 2019, Iberostar became the first hotel chain to be free of single-use plastic in rooms, eliminating over 420 tonnes of plastic annually, and in 2020 became single-use plastic-free across its operations. They also aim to stop generating waste by 2025, achieve carbon neutrality by 2030, and improve the health of all the ecosystems surrounding Iberostar facilities and achieve a sustainable model of tourism by 2030.

This commitment to protecting the oceans has earned Iberostar the recognition of an Oceansaver Accolade, presented by Waterlogic Spain in Iberostar Playa de Palma.

Waterlogic, one of Spain’s largest suppliers of drinking water dispensers, recently launched the Oceansaver Accolade programme to recognise organisations who have made a significant contribution and commitment to the reduction of ‘single-use plastics' that are not only impacting climate change but are dangerously polluting the world’s oceans.

Waterlogic has pioneered the application of advanced technology in the design of its water dispensers to deliver the most sustainable, safest water proven effective against COVID-19. The company is responsible for hydrating nearly 50 million consumers across the world daily and contributes to the reduction of 23.8 billion single-use plastic bottles each year. 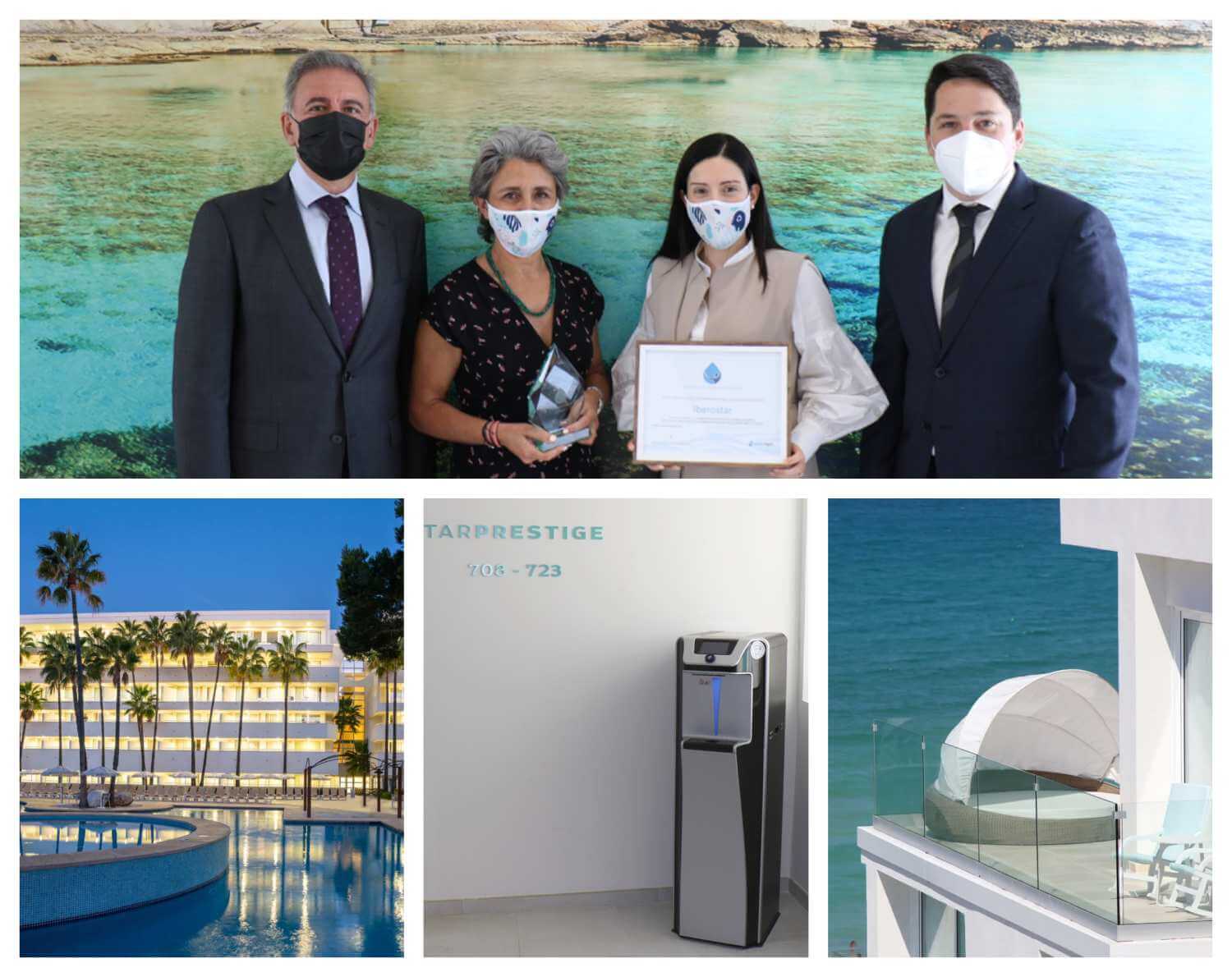 Ana Bartolomé, Project Management Office said, “Iberostar has always been committed to sustainability, it’s integrated into its DNA. With around 80% of its properties located by the seaside, Iberostar understands the responsibility to protect the oceans that have helped them so much”. She also added, “It’s great to drink water and know you are helping the environment”. In addition, more than 8 million tonnes of plastics enter the oceans each year*, and by 2050 the oceans will contain more plastic by weight than fish. †

In the coming years, the sea fish we eat will continue to contain microscopic pieces of plastic which is a danger to health. Decomposing bottles also release greenhouse gases which present further serious health risks.

Daniel Navaro, Sales Manager at Waterlogic Spain said, “We want to offer a new way of drinking water and to help the planet reduce its reliance on single-use plastics”.

Initiated in 2020, Waterlogic has recognised a number of customers for their outstanding commitment to saving our oceans and they continue to roll out the Oceansaver Accolade globally to celebrate customers who are ‘doing their bit’.

For further information about Waterlogic and their POU water dispensers please visit: https://www.waterlogicaustralia.com.au/

Founded in 1992, Waterlogic was one of the first companies to introduce point-of-use (“POU”) water dispensing systems to Europe and since that time has been a leader in the POU market in terms of product design, quality and the application of new technologies. An established organisation, Waterlogic has successfully grown both organically and through acquisition and continues to expand each year.

Waterlogic has an extensive and expanding independent global distribution network in place, reaching over 50 countries around the world. Waterlogic products are currently being sold in North and South America, Europe, Asia, Australia and South Africa. Leading markets are the US and Western Europe, in particular Germany, France, Scandinavia, the UK and Australia.

In addition, Waterlogic have developed Firewall® UV technology which at the point of dispense eliminates up to 99.9999% of bacteria, delivering the purest water possible with every cup dispensed. It also features BioCote®, an antimicrobial compound added to key plastic surfaces that keeps the dispensers fresher and cleaner for longer, protecting against odour causing microbes, such as bacteria, mould and mildew. Waterlogic water dispensers are designed with environmental sustainability in mind including; low energy consumption, recyclable materials and eco-friendly gas.

Winter tips to combat flu season in the workplace