As many news stories have already reported, Flint, Michigan is currently under a state of emergency due to water contamination.While residents were kept in the dark for nearly 18 months, the city of Flint has found lead (among other contaminants) in their drinking water after city officials switched their main water supply from the city of Detroit, to its own Flint River.

Through the months, the switch in water supply, initially done to cut cost, has led to unreliable drinking water conditions, lack of trust in city and state officials, lawsuits and health concerns of an entire community.

Over a year with contaminated water 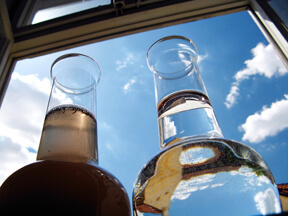 Although this story recently broke nationwide headlines, this is an issue which its residents have been battling since the city of Flint switched its water source to the Flint River in April 2014.

Soon after the switch, residents began seeing, tasting and smelling a difference in their drinking water. As reported by CNN, the State Department of Environmental Quality wasn’t treating the Flint River water with an anti-corrosive agent and water was eroding the iron water mains, turning the water brown.

As residents began to state their concerns about what they were seeing and tasting, city officials continued to report that the water was in fact, safe for consumption. In July 2015, Former Mayor Dayne Walling went as far as drinking Flint River water on local TV in hopes to promote the use of Flint water as safe drinking water for its residents, stating that he “drinks the water every day.”

While nearly 18 months went by before residents were truly heard and tests were performed that showed that the water was not just contaminated with iron, but with lead as well, the federal government has now declared a state of emergency and the Federal Emergency Management Agency (FEMA) will coordinate responses to help with this issue.

Dr. Hanna-Attisha from Flint's Hurley Medical Center has reported that the lead levels in children had “doubled and even tripled in some cases.”

Although the drinking water may improve over time, the health effects on Flint residents won’t improve since lead poisoning is irreversible. Dr. Mona Hanna-Attisha from Flint’s Hurley Medical Center, was seeing more and more worried parents coming in with concerns about rashes and hair loss. Since Medicare requires states to keep records of blood lead levels in toddlers, she compared the numbers to what she was currently seeing and found that the lead levels had “doubled and even tripled in some cases.”

In an interview with CNN, Dr. Hanna-Attisha explains that these children may suffer lifelong consequences.Lead poisoning is dangerous for anyone and can be related to symptoms such as hair loss, vision loss, memory loss, depression and anxiety, but it is especially harmful to children. According to The Mayo Clinic, “even the small amounts of lead can cause serious health problems.” Research shows lead exposure can affect a developing child's IQ (resulting in learning disabilities), loss of appetite, weight loss, sluggishness and fatigue, vomiting, hearing loss and much more.

In addition, the Huffington Post recently reported that a Flint Journal (MLive) revealed that 87 people were diagnosed with Legionnaires’ disease since the city switched its water source.Ten of those reported have died.Although city officials are stating that they can’t directly relate the increase of the disease to the water contamination problem, the outbreak did increase sharply in Genesee County when Flint made the change in their drinking water source.

Although this is affecting the current residents of Flint, the effects this will have on their population is generations deep."If you were to put something in a population to keep them down for generation and generations to come, it would be lead," stated Dr. Mona Hanna-Attisha during her interview with CNN."There's tons of evidence on what lead does to a child, and it is one of the most damning things that you can do to a population. It drops your IQ, it affects your behavior, it's been linked to criminality, it has multigenerational impacts.”

With the possibility of approximately 8,657 children in Flint that could have been exposed to lead-filled water since 2014. There is also the consideration of pregnant women who have consumed the contaminated water and how it will affect their unborn children.

Although Flint switched it's water source back to Detroit water in October 2015, the damage done to the pipelines and resident's health still continues.

Now that President Barack Obama has declared a State of Emergency, some $5 million in federal aid has been freed up to immediately assist with the water crisis. Although the president did declare this a state of emergency, he denied Governor Rick Snyder request for a disaster declaration as under federal law, only natural disasters (such as tornados or floods) can be declared. According to USA Today, FEMA will coordinate responses and cover 75% of the costs for water, filters, filter cartridges and other items for residents.

In the meantime, if you would like to help the residents of Flint, Michigan, CNN has reported several organizations that are accepting help in form of monetary donations, bottled water, filters, and volunteers.